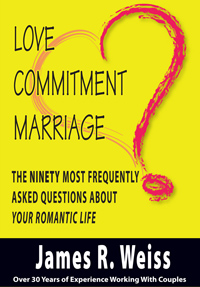 With Over 30 Years of Experience Working With Couples, Jim Weiss Shares the Answers to Ninety of the Most Frequently Asked Questions About LOVE COMMITMENT MARRIAGE

Here are a few of the Q and A’s from my new book:

Q 12    I love Steven very much. He is talking about marriage and commitment nearly every day, but he still carries a picture of his ex girlfriend in his wallet. I don’t want to violate his privacy. Jim, how should I deal with this? Is he still carrying a torch for her?

A          Dear Katrina, why not ask Stevie Boy why he is still carrying the old girlfriend’s picture? There could be dozens of logical reasons. Why not stop torturing yourself and go directly to the source for an answer? If lover boy cares for you as much as he claims he will toss the picture away. On the other hand, if he refuses to remove the picture from his wallet you have several issues you should discuss about the future of your relationship. Please feel free to call me and set up an appointment to discuss this problem further.

Q37     Jim, I know you’ve been asked this question at least a hundred times, but I’m going to ask it again. Why are so many men afraid to settle down and commit to one woman? My friends and I are tired of hearing these adult children telling us that they’re not ready yet. When will they be ready, when it’s time for them to collect social security?

A       This has become a problem of epidemic proportion. There are many reasons why otherwise normal bright men and women too refuse to marry, settle down and raise children. First of all, why should they? A man can jump from woman to woman until he’s 70 years old. Secondly, many of these young unattached people come from broken and dysfunctional families which means they are afraid to wind up like their parents.  Entitlement is another problem. They have never wanted to assume any adult responsibilities for their emotional life. Can these” basement boys” and their female counterparts be helped to grow up and commit to a long term relationship? Sure they can, but it takes time, patience and love.

Q 81    Donald and I have been married for more than four years. We shop, cook and do most everything together. Until last Monday we have never had an argument. It was really stupid, but what surprised me was that Don quickly became vicious. He used foul language and said some the most horrible things. Later that night he apologized and said that he was under a great deal of stress at work. I don’t want to believe that he is like the other guys out there. What can I do to prevent this from happening again?

A          Dear Ann, I believe Don when he told you that he is under a great deal of stress and pent up anxiety about his career. Our economy is causing many people to live in fear of loosing their job. Of course this does not give him the right to verbally attack you. In effect you are paying the tab for the craziness at his office. I suggest you and Don discuss his unacceptable behavior. You might bring up the subject of his out burst when the both of you are relaxed just after a good old fashioned home cooked meal; and as part of your conversation you may want to talk to him about his career. Your concern could help calm his anxiety and lower his level of stress.