“It is possible that you and I have been brought together at this time because we have profound truths to share.
I offer the wisdom of our ancestors so we may find the deep healing you seek.”

At the beginning matter and energy were formed and permeated throughout the universe. Thus we are composed of positive and negative particles which create energy fields. It is the interaction between these two energies that is the basis for psychic phenomena.

Through the ages certain individuals have had a greater sensitivity regarding the interaction of these forces. Jim Weiss, who has recently been named one of the fifty best psychics in this country, has spent the past thirty years using his gifts to help more than 40,000 men and women from Europe, Asia and thirty-eight of our own states. His predictions have enabled his clients to resolve conflicts and find answers to life-changing questions.

Jim’s first full-length book: Psychic For Life (Available on Amazon) has been featured on network television and in bookstores here and abroad. His one-of a-kind workshops and seminars have been presented to a wide variety of organizations including: Fortune 500 Companies, universities, colleges, the American Medical and Dental Associations. 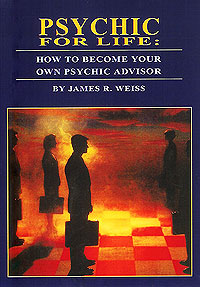